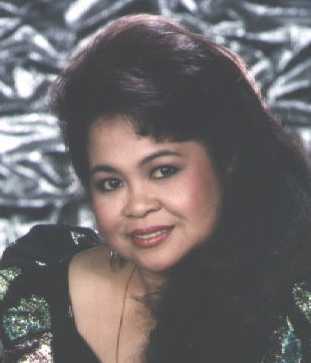 Mabuhay! I am Zonia Elvas Velasco, the artistic director of the Filipino Folk Arts Theatre in Dallas. I was born in Janiuay, Iloilo…. lived in Cagayan de Oro, grew up in Buldon, Cotabato and Metro-Manila. I am a product of the University of the Philippines where I took up physical therapy. At the same time that I was doing my physical therapy course, I was also cross-enrolled at the College of Music. I was a Music Promotion Scholar. I sang traditional and classical music, I sang opera, I sang with the big symphonies at the big prestigious concert halls of the country. I did broadways, sarsuelas, opera, oratorios, operatorios. At one time I was the country’s foremost coloratura soprano with my work still being played today in DZFE, Manila’s classical station.

My activities in the music realm involved also choraI work and I was choral director of community and church choirs. In my younger years, I enjoyed tuition free privileges as a member of the UP Concert Chorus. However, I toured the world six times as a member of other groups. One of the groups I travelled with, was the Philippine Madrigal Singers. I also went on two world tours with the Himig ng Lahi group of the late Felipe Padilla de Leon. I travelled with the Bayanihan Philippine Dance Company on joint government command and state performances abroad. I was a command performer at Malacanang Palace for the country’s state guests between 1971-1979. It was work, and research done for these groups that has led me to my present dedication to the documentation and preservation of the rich and mutlifaceted Philippine heritage.

Later on, I finished double Master’s degrees in Public Administration and Special Education. I then went to China to study acupuncture, and am now also a Doctor of Acupuncture. Presently, I make my living as a licensed physical therapist and acupuncturist.

I am a staffwriter for the Philippine Observer, a Phil-American community newspaper in Texas and the Southwest, where I write on the subject of Arts and Culture. I am a public speaker, with my forte on Communication Skills and Race Relations. I also have a much in demand lecture-demonstration program entitled Asian Pacific Islander Folk Arts Program, which is an interactive educational program for youth and the general community.

My latest project is as the producer and host of several public access cable television programs on Dallas Community Television with Filipino Folk Arts Theatre members. We have made some headway as three of our Filipino heritage programs became finalists in the 9th Crystal Awards this year.

Am I tuned only to Filipino needs? Not really. This year, I also am the chairperson of a United Way agency which addresses the issues of race – the Greater Dallas Community Relations Commission. Our television programs cover everything from gang problems and other community issues.

Despite what you see above, I don’t do everything. So, don’t ask me to do tattoes or body piercing. I don’t sky-dive, nor deep sea dive either……… neither can I fix my car when it stalls…….. ***

But I have dedicated myself and my work to the preservation of Philippine heritage, especially in the realm of arts and culture.

“My roots is what defines me and the way that I interact with the world. I have Filipino roots, from Iloilo in Panay island.

My family, education, professions, work and travel around the world has shaped me into what I am now. They have become part of my personality, my ideas, my dreams and aspirations.

Through my professional work in the cultural realm, as a classical music coloratura soprano, as a world traveler and concert artist, I have seen the lovely and the beautiful. Places and events have moved me, scared me, driven me to tears, some remind me of boo-boos and humiliation, but some also allowed me to experience elation and the soaring of the soul to heights never before reached.

The world is a beautiful place. And everywhere we go, we will never be alone nor be without help of other kindred spirits. I have travelled 6 continents of the world, and I have learned not to fear traveling it alone. What I have found goes beyond description.

I work in the medical field, but after office hours, I do something else. I work with the Greater Dallas Community Relations Commission (a United Way agency) and am 1997 chair. I was a member producer-director for public access television at the Dallas Community Television studios. I serve as executive director of the Filipino Folk Arts Theatre, Inc.. I am also the artistic director (librettist, scriptwriter, music composer / arranger / music and choral director, choreographer, etc.) of the following performing groups: The Vocal Ensemble, Los Bailes Españoles- Europeos de las Islas Filipinas, Kulintangan Serenaders, Southeast Asian Anklung and Bamboo Ensemble, Three Plus One. I give lectures / demonstrations / workshops for the Asian Pacific Islander Folk Arts Program which I usually present to schools and community groups. I also continue to give solo concerts and recitals as a classical coloratura soprano.

Every two years, I travel back to China for advanced acupuncture courses. I also go back to the Philippines and combine family visits with research and acquisition of Philippine folk arts and artifacts which is part of my family’s collection. Each year, I go to another part of the islands for my research. I have gone to almost all the islands now.

Philippine history amazes me, and the more I dig, the more I come up with events that are new knowledge to me. Philippine cultural arts are as varied as the many ethnic minorities that live in different areas of the islands, and as modified as the many colonizers, and foreign traders that have come into the islands to leave part of their own culture. Yet there are pockets and groups in the country that have not been touched by the outside world. They remain apart and so unique from each other, that it amazes me how they kept their culture as pure for so long, with dress codes and tribal laws that are so definitive of only their group.

The various Filipino languages continue to intrigue me. I was told by a linguistics expert that even if in the past, we were taught that they were dialects, when they took apart these so-called dialects, they found out that they could not really be dialects as they have different alphabets. They are languages.

The Filipino martial arts called Kali-Arnis is another area of interest to me. As a folk dancer with training from the University of the Philippines, Filipinescas and the Bayanihan, I find the exercises easy, since to me, it is related to some basic Filipino folk dance movements. My father thinks that I learned it fast because it was in my Panay blood. He himself was an eskrimador when he was young. He said that the 10 Datu’s (who practiced the art) brought it to Panay island, and that they are our great, great, great ancestors, so if I became a World Champion martial artist, it is probably because of this. I did become 1994 WEKAF World Champion in the women’s division.(But let me tell you a secret: I did train and worked hard, and I know it was more of the training that did it for me. We might be born with some talent, but expertise can only be had with persistent practice.)

I was an operatic coloratura soprano. However I did not pursue my operatic career since I did not see this as a good source of income for my family. But I still do sing, and give concerts. I have made several professional recordings of my singing. My background in the Philippines was the Cultural Center of the Philippines, the Folk Arts Theatre, the Madrigal Singers, the UP Concert Chorus. I was a Music Promotion scholar in voice, and studied at the University of the Philippines and the University of the East School of Music. Before I left the Philippines, I was a command performer for the Malacanang Palace, and was one of 8 singers chosen by the First Lady to accompany her on state tours. As such, I have sung for almost all the dignitaries and state guests that visited the Philippines between 1971 – 1979, including US Presidents Ford and Nixon. I have also sung for Russia’s Bordogni, and even Libya’s former President Gaddafi.

Filipino folk arts and traditions are close to my heart, and are part of my life-long research. Although I was born in Panay, I also spent a part of my childhood in Cotabato. The Maguindanaon kulintang music is something I teach now. I make biennial treks to the University of the Philippines College of Music to further my training and expertise.”

If there is anything I could help you with, you may reach me at:

This page serves as my resume.

This page is outdated since 2000. Will update soon.