The following material discusses the instruments that comprise the Palabunibuniyan.

The Palabunibuniyan is played in all types of celebrations. In mourning, death, calamity and the fasting month of Ramadan, they will be silent. *** 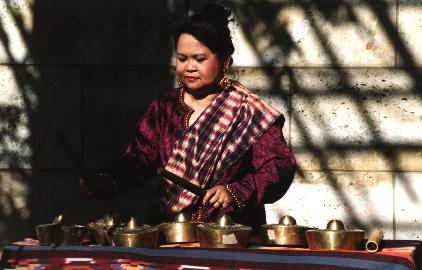 In Southeast Asia, there lies a tiny archipelago between the Pacific Ocean and the China Sea called the Philippines. The Philippines has 7,107 islands, and the second largest of these is the southern island called Mindanao.

Mindanao had always been considered the virgin land of jungles, volcanoes, waterfalls, monkey eating eagles, white and pink beaches, perfect sunsets, colorful vintas sailing in its blue seas and beautifully shaped pearlsfrom the depths of its oceans. It is the land where royalty, through the old Philippine Sultanate reigned.

In the south, there is Cotabato where on a clear night of the full moon, one could hear the music of the gongs, wafting through the thick humid breeze of the thick jungles. This was part of my childhood memories. I remember looking out of my window, staring at the moon, listening to the gongs played from a distance by the native Maguindanaon. The music would continue on through the night, and would create in my mind, images of rituals, festivities and dances.

North of Cotabato, there is Lanao – land of the Maranaos, their legends linking their land to Borneo…… their origins considered special because old stories speak of their holy beginnings through the intervention of one magical bird called the Sarimanok.

The island of Mindanao has many provinces, but these two on the western side are mentioned because most of the kulintang gongs are found here. The collection of kulintang gongs used in the collection, workshops and performances of the Filipino Folk Arts Theatre in Dallas come from these two areas: Cotabato and Lanao.

Here, in Mindanao, the Kulintang thrives and lives, witnessing the coming and going of life from birth to death, only to repeat the cycle again and again, from one generation to the next.

Here, the Kulintang master is regarded as someone very special. He is a celebrity. He has power. For only the Kulintang master could control people’s feelings through his music. He could make them cry with the sadness of his sinulog music. He could express anger, love and joy through his binalig pieces. He could impress everyone with his tidtu virtuosity as his playing sticks go faster and faster over the protruding bosses of the kulintang.

And for rituals of birth, coming of age, wedding, death, religious rites, there is the tagunggo music.

The gongs are a cherished instrument. Ownership of the Kulintang is a measure of wealth, and endows prestige and a higher standard of measure to the family. It is not uncommon for the Kulintang to be used as a wedding dowry gift.

Kulintang – referring to the musical instrument composed of 7-8 graduated gongs laid horizontally on a rack, played by a pair of soft wooden sticks.

Kulintangan – Sulu and Sabah term referring to the whole ensemble or orchestra, of which the kulintang instrument is only a part of.

Palabunibuniyan – Cotabato term used to describe the Kulintang orchestra above.

This entry was posted in Malay Influence. Bookmark the permalink.