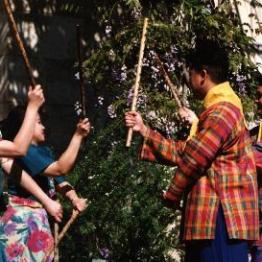 The martial arts of the Philippines is known by the many names that describe it: Kali, Arnis, Kuntaw (also Kuntao), Silat, Eskrima.

It is most known for its use of stickfighting, where rattan sticks called olisi are used in either single, or double handed styles. Sticks are of course only one of the weapons used, as the Filipinos have a great many types of bladed weapons. Espada y daga, is the term used to describe a common weapon combination where one hand holds a long sword, and the other a knife.

During the Philippine American wars, the Filipino warrior’s skill in this fighting system was most feared by the American militia because of their efficient use of bladed weapons in combat.

In fact, the Marines who were assigned to Mindanao started to wrap leather around their necks to avoid decapitation in full-contact combat. For this they earned the name leathernecks.

Kali is the oldest name for this art. This word is traceable to India. In the southern part of India, the goddess Kali is worshipped. She is known as the goddess of destruction.

History tells us of how the Indians crossed the Indian sea to Indonesia, established their stronghold in Bali and Borobodur. Although there are no written records of Hindi practice in the Philippines, Pat Badillo had found about 120 stone carvings in a cave off a Batangas shoreline that show the Ramayana and other Hindi gods.

Then again, traders who went back and forth through the Philippines, or immigrants from Indonesia may have well brought this word to the Philippine vocabulary. (East Indians say there is no similar martial art practiced in India)

Silat, is a common term used in both Indonesia and the Philippines. Pentjak Silat is the term used in Indonesia to describe their martial art. In Mindanao, where this martial art is prevalent, it is just called Silat or Kuntaw-Silat. The opponents center of gravity is undermined through a myriad techniques which cause him to lose balance.

Kuntaw-Silat, is practiced in the south, mostly in the Zamboanga and Sulu areas. Kali–Arnis–Eskrima are heavily practiced in the Visayas islands, mainly in Panay, Bacolod, Cebu. In Luzon, the earliest practice is traced to the Batangas area.

Arnis and Eskrima are terms used by the Spanish to describe the art, since the martial art uses sticks (arnes) and swordfighting techniques (eskrima). When the Spanish conquistadores came to the Philippines (1521-1898), they witnessed Filipinos fighting using these techniques.

Knowing that they have already lost many Spanish lives to Filipino warriors, they forbade the study and practice of this martial art at gunpoint and threat of execution. So the Filipinos went underground. This martial art was passed on only to direct descendants, closest and most trusted friends. They were taught in the dark, by nightfall in forests and caves. They were also put to music, and some Filipino dance steps practiced today, are actually martial art movements and exercises.

It was not uncommon to call the practitioner “escrimador” at that time, a practice that continues on today in the rural areas. “Escrimador ka bala?” (Are you an escrimador?), is the question asked of the Kali martial artist. ***

Some videos demonstrating the FMA Arnis:

(This page is still under construction and last modification was on May 25, 1997. I will be happy to research and answer your questions. Please come back for more info…..)